With Chinese weary of Mao's "permanent revolution," Deng Xiaoping began a new craze–for making money. Taking charge of China after Mao's death in 1976, Deng's "Reforms and Opening Up" ushered in the growth Chinese had dreamt of for so long.

Deng Xiaoping (1904-1997) was born to a gentry family in Sichuan while Empress Dowager Cixi still sat on the throne. His father saw the upheaval coming to China’s society and rather than giving his son a classical education, he enrolled Deng in a program that sent him to France.

Deng spent five years working in factories in southern France and visited Moscow, where he first encountered Leninist thought, setting him on the socialist path. At a young age, Deng had already seen far more of the world than his colleague Mao Zedong, but he lacked Mao’s complicated relationship to Chinese tradition, having been spared Mao’s strict classical education.

Deng joined the Chinese Communist Party first as a junior staff member at the party headquarters in Wuhan, serving briefly under Chen Duxiu and meeting the young Mao. He developed a closer relationship with Zhou Enlai, following him to the secret party headquarters in Shanghai. From Shanghai, Deng was dispatched to rural Guangxi to help foment rebellion in the countryside.

Deng spent most of his career in the Communist military. While he never gained a reputation as a guerrilla hero, he built strong ties within the party’s military leadership. He commanded troops on the front lines of the Anti-Japanese war in the 1930s and 40s, and served as chief political officer in the Huai-Hai Campaign, which sealed the Communists’ victory over Chiang Kai-shek’s Nationalists.

From that position he oversaw the “Anti-Rightist Movement“, persecuting intellectuals, but also showed a more reform-minded side, opposing the Great Leap Forward. In the early 1960s, Deng famously proclaimed, “yellow or white, a cat that catches mice is a good cat,” a slogan that would come to represent his pragmatic attitude toward Chinese economic policy. 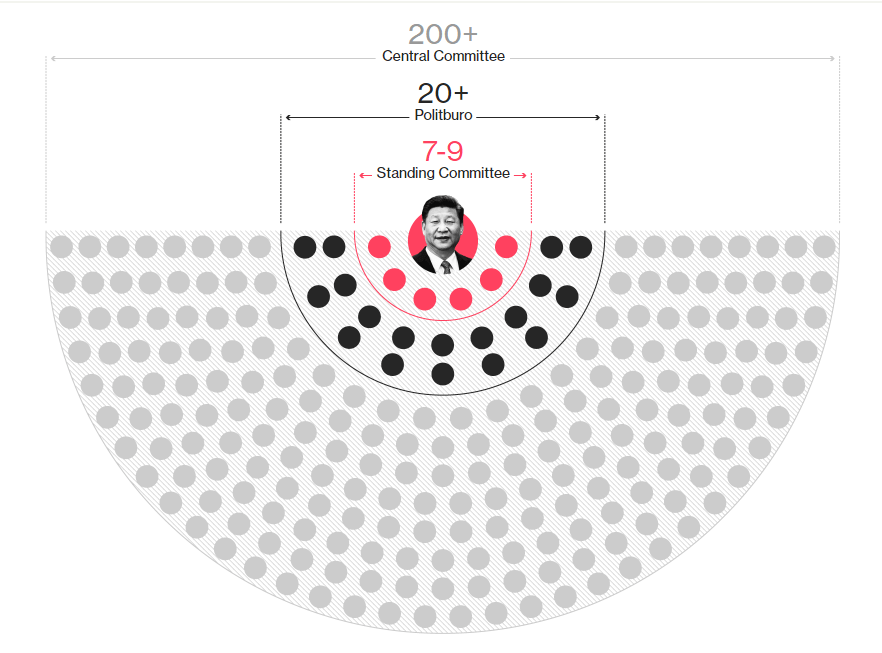 The structure of the Chinese Communist Party today

The Cultural Revolution, which began in 1966, did not go well for Deng. Ousted from the party by the Red Guards, Deng was sent to work at a tractor repair facility in Jiangxi Province.

Deng’s family suffered, most tragically his son, who was paralyzed after leaping from a window to escape Beijing University Red Guards. Despite his political isolation, Deng maintained hope of an eventual return to power.

Deng’s chance came in 1973 when Mao summoned him back to Beijing to counter the excesses of his wife Jiang Qing and the Gang of Four. Deng quickly set about trying to get China’s economy and international reputation back on track, traveling to the United Nations in 1974 to speak at a conference on economic development.

Zhou Enlai’s death, in January 1976, sparked a massive public outpouring of grief. Mao failed to make an appearance at the funeral, leaving Deng to give the eulogy: Deng considered Zhou his “elder brother” from their time together in France. Deng had been running the country since his return from the countryside in 1973, brutally repressing a Muslim rebellion in Yunnan. But when the government refused to allow people to express their grief publicly over Zhou’s passing, protests followed.

The government quickly shifted blame to Deng for his passionate eulogy, giving Mao and Jiang Qing reason enough to oust him once again from power.

When Mao died on September 9, 1976, he passed over the disgraced Deng Xiaoping to make Hua Guofeng his successor. Hua moved quickly against the Gang of Four, including Jiang Qing, but proved no match for the resilience and connections of Deng Xiaoping. Deng slowly consolidated support in the party and army for his cause, positioning himself to take the helm of China’s ship of state in 1978.

Deng was closely involved with the effort to rewrite Mao’s legacy. While confirming Mao’s role as a savior of the Chinese nation, the party line now declared that Mao was only 70% correct, and acknowledged many small errors of his era. Deng made several important liberal moves of his own, issuing pardons for millions of political criminals and famously traveling to the United States to meet with President Jimmy Carter and attend the rodeo. 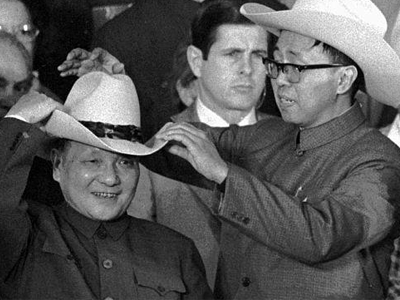 Deng’s changed the course of Chinese history  at the 3rd Plenum of 11th Party Congress in December 1978. Proving once and for all that he had wrested control from Hua Guofeng, Deng introduced the policy of “reforms and opening,” or gaige kaifang (改革开放), marking the start of a new era for China.

Tagged as: reform and opening    |    Tweet This   |     Like This
"From this day forward, we renounce class struggle as the central focus, and instead take up economic development as our central focus," the CCP promised. With that single sentence, Deng summarily canceled two decades of Maoist policy.
page 281-282

1979  Wei Jingsheng and the Democracy Wall

The Democracy Wall movement of 1978-1979 provided an early challenge to Deng’s leadership. A simple brick wall in an unremarkable Beijing neighborhood became the focal point of a pro-Democracy movement that spread when the central government did not clamp down immediately. Deng, in fact, initially supported the wall, calling for “emancipating the mind” and “seeking truth from facts.”

The central figure of the movement was Wei Jingsheng, an electrician at the Beijing Zoo, who posted a small flyer calling for “The Fifth Modernization–Democracy, etc.” Wei was the first prominent member of a new breed of Chinese dissident, who challenged the idea that restoring China to wealth and power justified the use of any political means.

But with China embroiled in a border dispute with Vietnam and his leadership position solidified, Deng decided the movement had gone far enough. Wei was arrested, tried and sentenced to fifteen years in prison.

Tagged as: democracy, protest    |    Tweet This   |     Like This
Wei differed in seeing democracy as an end in itself, and he was utterly contemptuous of the view that what the majority of ordinary Chinese most needed from their government was better economic times and stability without self-government.
Page 287

Under Zhao, China went about the process of decollectivizing agriculture, setting up a Special Economic Zone in Shenzhen, and launching a wave of entrepreneurship with Township and Village Enterprises.

Despite rapid rural growth and a diminishing gap between rich and poor, not all was well in Deng’s first few years in charge. Rural price increases were driving up prices in urban areas, leading to increasing unrest among students. In addition, Deng faced opposition by some party hardliners, most notably Mao’s former economic advisor Chen Yun.

Tagged as: economy, protest    |    Tweet This   |     Like This
But this honeymoon of good cheer was not fated to last long. Not everyone in China was so grateful to Deng for simply not being Mao.
page 297